By definition a “coming together,” Konvergence is an expression of optimism and hope, international friendship, communication, and freedom abstractly embodied in the reflective, luminescent, and geometric nature of ‘star.’ The star is the form and the space; it is not visually or symbolically obvious, it requires thought and contemplation to find and see — to find its reflective, luminous, intangible, changeable, mathematical, cosmological, centered essence in the shifting pattern of the scene. 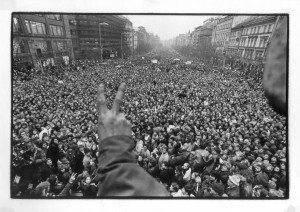 For the artists, the origin of Konvergence is found in the November 1989 convergence of more than 300,000 people in Prague’s Wenceslas Square, peacefully seeking freedom as captured by Petr Rošický’s quintessential LIFE Magazine photograph. That the Ewing/Novák artist team would eventually emerge to create together, one who lived and worked for decades under Soviet oppression while the other was raised in mid-western American freedom, is a testament to the incredible transformation which followed the ‘Velvet Revolution.’